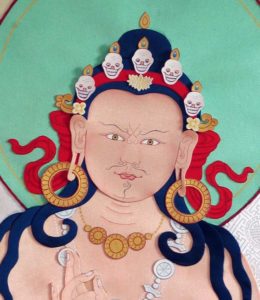 As we arrived at Kunselling, we encountered stormy weather which persisted
into the initial days of the retreat, with high winds and lashing rain. In a way,
the storm mirrored the turbulent contortions of mind that Igor led us through
during our six days in Kunselling.

Igor has a sound grounding across various contemplative approaches. He
began his journey with meditation in the 1980s, training in the Korean Zen
tradition. Igor became a student of Chogyal Namkhai Norbu in 1996 and he
was authorised to teach Santi Maha Sangha Base Level in 2002. Since 2007,
Igor has also taught SMS Level One. Many of the retreatants had taken their
Base Level exam with Igor. Much to the credit of Igor’s engaging and
entertaining style of teaching, a sense of camaraderie and cheerfulness quickly
formed among the group. 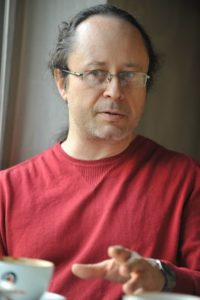 It being a practice retreat, we delved into the Semde practices contained in
SMS Level One, which are divided into three principal sections for practitioners
of higher, medium and lower capacity. Each of these divisions contains various
practices that aim to provide the practitioner with various experiences which
offer discrete insights into the mind. The practice involved various mind
exercises which required substantial effort that could, at times, be challenging
to sustain. The retreat schedule was not for the faint-hearted, with four
sessions each day, including a four hour session in the morning, punctuated by
a short break. At various times, we probably all felt exasperated, but it seemed
that, despite the slog, everyone got a great deal out of the intensive nature of
the practice.

As part of our practice, Igor asked us to share our experiences with the group.
Igor commented that even though Rinpoche has on more than one occasion
encouraged his students to share their experiences with one another, as an aid
for our practice, under appropriate circumstances, yet this is a trend that has
never really caught on across the Dzogchen Community. As we did share our
experiences, it became clear how useful the exercise was, in that it provided
different insights. As Igor said, through the actual process of verbalising our
experiences (including doubts), we could at times glean fresh insights into
‘what is going on’.

The group photographed on the last day of the retreat

We made good progress, keeping strictly to the schedule outlined above and
completing all of the practices we set out to undertake. Kunselling was full and
we were glad to welcome many international participants, including a trio of
Italians from Brescia, as well as German and Austrian practitioners.
Many people collaborated to make the retreat such a success but particular
thanks must go to Cindy Faulkner who organised the event. Much gratitude
was also extended to Cook, Red Hardingham, ably supported by Maciek Sikora.
The Shang Shung Institute UK has invited Igor Berkhin to return to London next
year as part of a large event being organised in May, a Festival of the Mind. It is
also envisaged that Igor will teach a retreat for the UK Dzogchen Community programme of events, so do watch this space!

About the Author: Trinley Walker

Hi!, I'm reporting about London news and events relevant to the Dzogchen Community.