REFRESHING THE IMPORTANCE OF THE SANTI MAHA SANGHA

Now that spring has arrived, it feels like a good time to refresh in our minds the importance of theSanti Maha Sangha.  The Santi Maha Sangha training is a programme of study and practice created by Chögyal Namkhai Norbu in 1992. The words: ‘Santi Maha Sangha’ literally means ‘Dzogchen Community’ in the ancient language of Oddiyana. Its goal is to train practitioners so they are able to attain a real, in-depth knowledge of the Dzogchen teachings based on personal experience.

The Santi Maha Sangha is something unique, as Rinpoche personally created this course for his own students by collecting together significant quotations from the works of great masters, together with his own comments and advice. Rinpoche considered it important that all his students have direct access to the insights and advice of these enlightened teachers so he dedicated much of his precious life to creating this special programme. Overall, it took Rinpoche many years to research and write the Santi Maha Sangha books, starting with the ‘The Precious Vase’, which constitutes the Base Level text.

A Dharma King, Rinpoche was one of the most accomplished and greatest Dzogchen Masters of our era, as well as being a living example of how to embody the Dzogchen teachings on an everyday basis. This is something truly amazing! As his students we are blessed with great good fortune. We are also extremely lucky have this unique opportunity to deepen our knowledge of Dzogchen due to his dedicated effort, through the Santi Maha Sangha programme. In fact, the Santi Maha Sangha training is something very significant not only for the present time but also as a guide for future generations.

On many occasions, Rinpoche said that it was his sincere wish for all his students to study the base of the Santi Maha Sangha. He considered it a valuable foundation for everyone, irrespective of their age, culture or their experience of the Dzogchen teachings. The main purpose of the base level of the Santi Maha Sangha is to broaden each individuals understanding of Buddhism as a whole, since it covers the main principles of Sutra, Tantra and Dzogchen, both from a theoretical and practice perspective. By following the Santi Maha Sangha programme it also helps to stabilise our own view, meditation and behaviour, by creating a broad framework of knowledge, which is something extremely valuable.

Each level of the Santi Maha Sangha is a complete path in itself. However, Rinpoche also transmitted many precious teachings on the Dzogchen Semde, Longde and Upadesha as well as many of his own Terma teachings during his lifetime.All of these teachings can also help us to further understand and amplify our knowledge of the Santi Maha Sangha. It is the responsibility of each person who received these teachings to practise them on an individual basis. However, we can also do this collectively since we are part the Dzogchen Community, whose main goal is to offer support to one another and make the teachings come alive and grow within us.

To study and practice the Base level in depth, or indeed which ever level of the Santi Maha Sangha has been reached, presents a very stable and secure method for developing all the necessary experiences to proceed on the path towards complete liberation. It is a way for all practitioners to realize the state of Dzogchen within themselves and thus help to uphold the continuation of the Dzogchen teachings. For further inspiration, please refer to ‘The Dzogchen Community Principles and Guidelines’ and ‘The Precious Vase’, as well as by participating in the many Santi Maha Sangha study groups and courses which take place internationally. 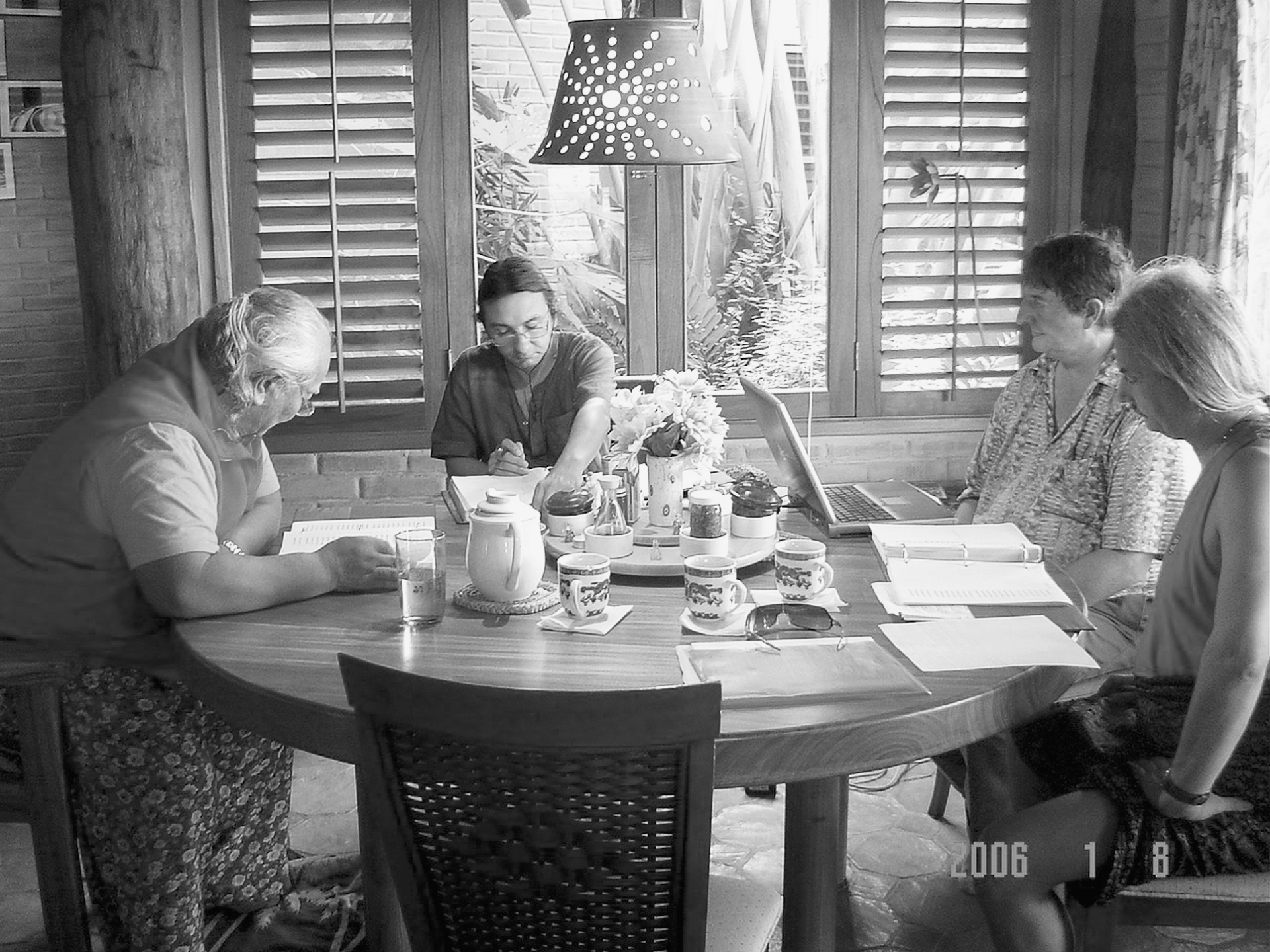 Rinpoche with Elio, Jim and Adriano