Here at Dzamling Gar we have had a bookshop for a while now and it has undergone a few changes and developments in the recent months.

I am introducing Alessandra Policreti who has been managing and running the bookshop since about two years. She says that up until June 2017 the bookshop was run by the Dzamling Gar gakyil. It is only roughly in the last 6 months that the bookshop has become part of Shang Shung again. 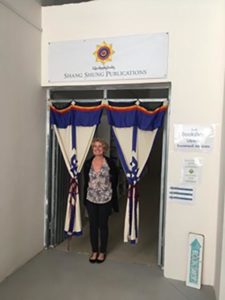 The collection has expanded so that titles are now available in English, Spanish, Italian and a fewbooks are available in Russian. Alessandra says that they would like to have more languages available, but right now the space is limited on the premises where the bookshop resides: in the Jyagyip of the Gar below the Cafeteria. This location is only temporary and the hope is that a larger space for the bookshop will be available in the future when the Gompa is ready to be occupied.

The larger part of the books on display in the bookshop is published by Shang Shung Publications. However, Alessandra points out that she has titles by Rinpoche published by other publishers. She says that they also have books by other teachers available, and I am guessing that they are mostly concerning the teachings or biographies of Dzogchen Masters.

Soon more and more books will be available in Spanish. Up to now there have been fewer Spanish titles available than in English or Italian and a lot of work lies ahead in catching up with this imbalance. It will take some time to catch up. However, it will be done, since after all we are here in Spain and we need to have books in Spanish equally on display. 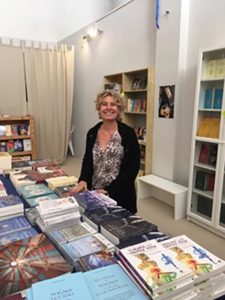 Alessandra and I also spoke about the expansion in merchandise offered in the bookshop extending to jewellery imported from Nepal and also some very colourful book covers. This helps the fundraising aspect for the Shang Shung Foundation. If people need to get a little gift before they get back home for example, they can find something here. Also on offer are pens, stickers, pen drives and photos. The bookshop also offers gift cards, so that if people want to buy a gift for someone, those can buy their own books with that. Gift cards for Kunye Massage offered here in the Gar for the season are also available. CD’s and DVDs are still sold, although most people these days will get audio and video downloads directly from the website.

A new display of various products of Tibetan Medicine offered in tincture and the traditional pill form can be found in the bookshop. Quite a large variety is available with detailed descriptions and explanations for their use.

I notice that there are new shelves for the books and they look quite elegant. Alessandra says that they have decided to change the look and in my view, to a more professional one This way people have more space to look around in the bookshop and the books are more protected by sitting on the shelves rather than being stacked on tables.

About the Author: Amely Becker

Amely is a long term Dzogchen practitioner who has moved to Dzamlingar to be with the Master.