Mandarava in Baja – Part One – by Jane Weston

A year ago today, I set off for Baja California. My plan was simple – to spend a month at Tsegyalgar West, making a personal retreat of the Dakini Mandarava.  In a series of blogposts, I am going to describe this amazing Gar and some of my meditational experiences there, in the hope that I might inspire others to do the same.

What better time than the dark, damp days of the cold, northern winter to tell a tale of a magical Gar set near the Tropic of Cancer, where the sky was a cloudless bright blue for a month and the most appropriate garb was a tee shirt and shorts?

I began planning my retreat after Chogyal Namkhai Norbu Rinpoche indicated that it would be productive for me to focus my efforts on Mandarava practice for a time.  Thinking about this change of emphasis, I recalled that Rinpoche himself regularly makes a month’s retreat of Mandarava when he gets the opportunity.  I was fortunate to be retired from paid work, to have enough financial resources for the trip and to have a family who supported my plan. My children thought it was a great idea and tactfully remarked that I should go while my health was still OK! I thought about just how lucky I was, and what better way to deploy my good fortune than to attempt more intensive spiritual practice than I had ever had the opportunity to do before?

Tsegyalgar West came to mind because, of all the places where Rinpoche’s students look after Gars and Lings, this is the one that he recommends particularly for making a prolonged personal retreat.  The particular characteristics of the Gar that lend itself to this purpose will become clearer as I write.

The Mexican province of Baja California used to be a very remote and empty region. I had journeyed down the length of the Baja peninsula 40 years ago and was impressed then by the desert scenery, vast human-free spaces and luminous skies.  For anyone unfamiliar with the geography of the North American continent, Baja California is the long, long finger of land which extends for hundreds of miles down Mexico’s western coast, separated from the Mexican mainland by the Gulf of California.  When I was a twentysomething student, the only cheap travel option was rickety bus and there were very long dusty journeys punctuated by unscheduled stops when the bus broke down and had to be mended at the roadside by ingenious locals seemingly using only bits of oil drums and string. To journey onward south towards Mexico City on the mainland, you crossed from the southernmost tip of Baja by ferry.  Nowadays you can fly there directly into Los Cabos International Airport, which has been built at the bottom of Baja to service the sunshine resorts that have sprung up to cater mainly for the Norteamericanos and Canadians known as sunbirds who migrate south in the winter, desperate for some reviving rays of the tropical sun.

So, this is how I arrive at the airport myself, as a sunbird, pale and wan after a long-haul flight from the northern winter.  The minute the door of the plane is opened, a wave of hot dry desert air sizzles off the black of the tarmac and hits my lungs like a song.  I feel that instant opening and expansion of the heart. Baja, if nothing else, is Hot.

I am collected from the airport by Giorgio Minuzzo, who is a pillar of the Gakyil of the Gar, and we drive north along the blacktop highway which follows the flat eastern coastal plain.  To begin with, the landscape is flat and uninspiring, with the usual strip development of gas stations and supermercados lining the highway.  Plastic tumbles along the verges on the desert wind, dust settles on the scrubby bushes turning them as white as a wedding dress. The same products of consumerist capitalism are flogged on the billboards, only a change in the language telling me I am on a different continent.  Always on our left, however, is the promise of the mountains, distant but clearly visible in the desert air, which seems to miniaturise what is a high mountain range. The massif hunches its vast spine all the way down Baja – this section is called the Sierra de San Jose. Soon, we take a turn off the highway onto a dead flat dirt road that first aims straight at the mountain barrier but then begins to twist as we climb, leaving the dubious delights of urbanisation behind us.

The Gar lies 15 kilometres up this road, which looks pretty primitive by European standards. It is always maintained whenever it is washed out by a hurricane, because it eventually forms a link over the mountains to the western coast of Baja. The dusty road is the colour of a rattlesnake and twists like one as it follows the contours in its efforts to gain height. There are spectacular views of the Sierra. The outlines of the mountains are so sharp in the pristine air, they seem more real than real – a hyper-real theme that recurs to me often during my stay in Tsegyalgar.  The shadows they throw are as sharp as black flint axes.

The light is fading now and I glimpse great cactuses as high as a house, identical to the ones I’ve only seen before in cowboy movies.  They shoot up like enormous candelabra and I start humming “Aaaah was bor-orn, undra wondrin’ staaaar” to myself.  I am alarmed by the other cactuses that are like inviting giant green leather poufs. A closer look reveals their three-inch-long spines, which would deter any sitter except a rhino.

We drive through a landscape empty of all human traces except for the very occasional small adobe shack.  The Gar itself is nearly five square miles of this country, lying half a mile off the road and protected by a wire fence designed to keep out the little black steers that the local rancheros run on the foothills.

The track running up from the road gate passes a large Tibetan symbol ‘A’ painted on a boulder. This is the only indication that the old Ranch of the Oranges is now Tsegyalgar West.  I have arrived at the end of a long, long outward journey and the beginning of a long, long inward one. For a month, I will hardly stir outside the Gar, but when I leave it, I will be a different person. 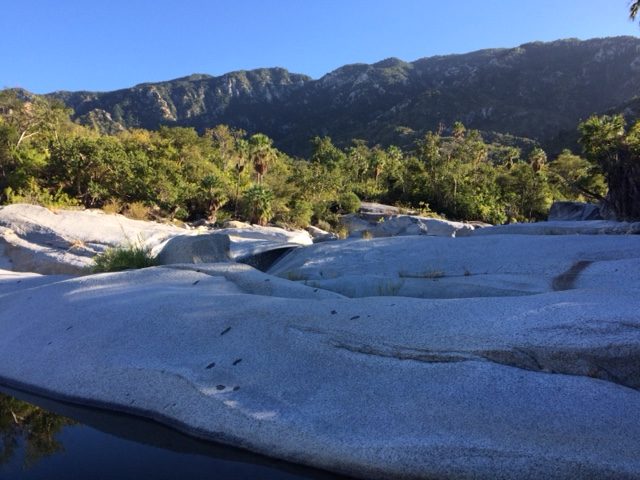