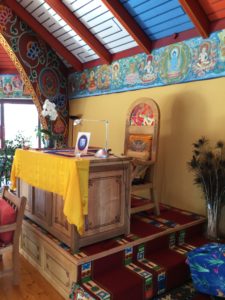 Feels like it’s time to pull out the notes from my pilgrimage last year to say farewell to our precious Master.

Our collective year of mourning and reflection following Rinpoche’s passing has now ended: in the random personal reflections offered below I have no wish to intrude upon that nor to speak for anyone but myself.

How intense these past few months have been. Losing our Master, the great force of enlightened realisation who brought us all together, has no doubt been challenging for each of us in different ways, and obviously it will continue to play out in the years ahead in our community.

I’ve been pondering how he did it… How did he bring us all together and magnetise us in all our endless diversity, across five continents? My own – inadequate – response to that question is one that will keep me in his transmission for ever: he does it through the sheer magic of his presence and of what he has given us.

Magic. Watching and doing the Khalongdorjeikar at Merigar last October brought home to me, for about the 700th time, how numberless the portals are that Rinpoche has opened up for us to a magical universe, the keys to which are the nature of our own mind and our ability to abide there, in our true home.

Most other masters have us working through countless thousands of this or endless teachings on that – and no disrespect for those approaches intended at all. But Rinpoche was quantum computing in a landline world. Poetry in an age of prose.

Anyone could see his various and abundant human qualities – total independence of mind, guts in dealing with what life threw at him, a bullshit-free approach to everything, practical, fun-loving, wrathful, joyful – the list goes on.

But his defining vibe was magic. He couldn’t hide it if he tried; he exuded it, it just flowed from him. The real thing. The deep, potent magic which powers the universe. I’ve never met anyone like him. He was after all a tertön. A magus. Master, majestic, magnificent – and lots of other power words beginning with M. Dodgy etymological parallels apart, each term on its own is true of him. He was a saint, too, obviously, but that marble-cold word doesn’t have the cachet in the post-Christian West it once did. ‘Realised’ and ‘huge capacity’ obviously, too, but frankly those words don’t carry much resonance, either – ‘realised’ sounds like ‘electrocuted.’ Maybe only the word ‘genius’ has the resonance and prestige in our impoverished culture to even roughly begin to convey something of what Rinpoche was. That awesome range: the dances. The Longsal. The historical research. The practices, the yoga, the dreams, the breadth, depth and precision of knowledge. On and on… God help us, even a full-time job and family…

Magic was my overwhelming feeling, too, when I first struggled to learn the Vajra Dance at Kunselling in 2007 and 2008. Despite my beginner’s faltering steps, I had never thought it possible that such beauty, grace, sacredness were still present in this charmless modern world outside the imaginations of the greatest poets and artists. Yet here we were, tracing the lineaments of utmost beauty downloaded from a sacred dimension by an extraordinary being. Who you could email and who would actually reply. Here we were, envisioning ourselves as sacred beings bodying forth

Beauty, truth, and rarity,
Grace in all simplicity,

as The Phoenix and the Turtle puts it – William Shakespeare’s mysterious poem resonant with the alchemical dance of unity-in-diversity, of Pawo and Pamo, Master and disciple, discovery and transformation.

And because Merigar is the place in all the world that for me most embodies this deep magic, I knew I had to go as soon as there was a gap at work. Visiting in October 2018 allowed me to come full circle, since I first experienced Merigar in October 2008. A round decade, my own little magic thigle.

What a wonderful week it was. There was still vajra family there, coming and going, old friends and new, the flow of people held within the wider flow of blessings that was palpable as we practiced together there. Rinpoche was with us still, as he always will be. Even Nature seemed younger than in 2008, the colours around the Gar greener, as if someone had pressed Pause on the flush of autumn across the valley at this moment of passing, in this timeless, secret place of beauty, this place of safety.

Above all, it was such a joyful week. Odd to be saying that, perhaps. Of course there was poignancy – seeing the Master’s form in its resting place, feeling the force of his absence as much as his presence. But it was also a week filled with kindness, with hope, with a sense that the transmission is always within and can only deepen, metabolise, and bring forth its fruit. And uplift in remembering just how many incredible seeds have been planted within by the kindest, sassiest, most generous Master…

And wasn’t joy, too, what Rinpoche always held out, inviting us to sunny, beautiful, vibrant places like Tuscany, Tenerife, Margarita – Hackney! – to enjoy the life of the senses and the body and the heart. Meeting with friends, singing Songs and dancing Dances, presided over by a Master on his island like the old magus Prospero but greater, ever at ease in his dimensions of magical transformation.

So… thank you, most precious Master. Inadequate, ordinary words bearing a burden bigger than they can carry. Thank you for giving so freely what is unrepayable.