At Tsegyalgar West, apart from my usual schedule, or rather my unusual non-schedule, there were some meditational highlights that took place in special places on the land. The first of these was the look-out rock which is situated directly above the Gonpa of the Gar. You can climb up to this to do silent sitting or sky-gazing there and see a clear view of the mountain Rinpoche named Mount Tsegyalgar when he visited. 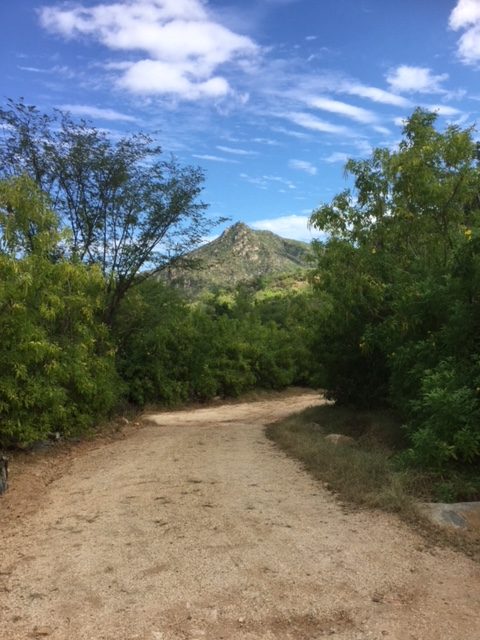 The walk up to the look out rock is a journey in itself. A narrow sandy path winds past a pond, which is only six inches deep, but hides enough frogs to deafen you at certain times of day, as they all suddenly compete to drown each other out in a mad croakfest. The water is perfectly clear and trickles over vast granite boulders around which you clamber, passing the filtration plant which provides all the water for the Gar from springs which never run dry, even in this arid environment. There are orange and lemon trees and many aromatic shrubs, all strange to me. Tiny lizards scuttle away and I take care where I am stepping and putting my hands on the boulders as I climb. Veronica’s warnings of rattlesnakes and giant spiders are lurking in my over-vivid imagination and became all too real when I met a little black scorpion waving his claws at me in my wash basin at midnight. I’m sure all these venomous types would rather avoid big squashy me altogether and sensibly keep well out of my way, but I’m not taking any chances, as I do not fancy a frantic trip to A and E down the rutted, pot-holey road.

All the time I was on the Gar, I never saw a snake and, towards the end of my stay, even began to rather long for a glimpse of a rattler, at a safe distance of course.

The steep climb finally rewards you with the most stupendous view out over the Gar to the mountains and, if you have a good head for heights, you can clamber up onto the top of the rock to sit, eyes open and gazing, into a completely cloudless blue sky.

The other very special meditation place, for me, was the arroyo, which is about four kilometres from the buildings of the Gar but still on its land. It is inaccessible and you have to walk about a mile off the dirt road into the hills to reach a gulley where a river tumbles down over great granite boulders, some as big as a casita. The water forms shallow rivulets over the boulders and waterfalls which fall into deep clear pools where you can swim if you wish.

The Latinas find this a very conducive place for Outer Rushen, as, if you know the terrain, you can jump or dive off the rocks into the pools, if you are so inspired. I stuck to sedate swimming and sunning myself cautiously in the strong sun before retiring to the shade between the boulders.   There are places where you can build a fire from sun-bleached driftwood and do a Puja for the Guardians, or, at dawn, a Mandarava practice with Tsogthig breathing. This involves visualising the intake of breath as clear blue light and that is so easy when you have a perfectly clear blue sky before you as inspiration… 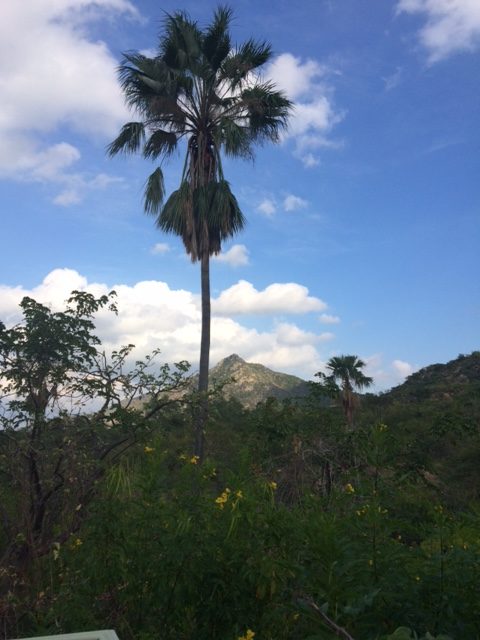 I am a born sceptic, brought up by scientists, and am not at all susceptible to cultural beliefs about invisible entities and power places (although I keep an open mind, having so often listened to wise Lamas talking about such things as the norm). It’s not really that I don’t believe in the possibility of such things, I just always rule myself out of such an equation by thinking “such things might happen to other people but they do not happen to me”. My Buddhist friends call me incorrigibly left-brained. I call myself independent minded. It is always a matter of point of view. Having said that, I can honestly say that I did feel power in this place. The clarity of the air seemed to act like a magnifying glass concentrating the rays of the sun to dispel the fogs in my mind. Perhaps the unfamiliarity of the place and the removal of my usual routines liberated me from my conditioning. Whatever the reason, the conditions of Tsegyalgar provided the perfect secondary causes to enhance my meditational experience.

to be concluded next time…