A New Regime at Kunselling, by Rose Lewis

The Community received quite a shock back in February of this year when we had a visit from Powys Health and Safety during the karma yoga retreat. We knew they were coming, as it was a new requirement of our insurers, and we frantically gave the kitchen a thorough clean and generally tidied up. So when we received their report we were devastated to find that our kitchen needed a deep-down clean which included plastering the stone wall, we needed a food hygiene management system, the house banisters needed uprights and the mandala fence was too low and lacked a lower bar. We were awarded a grading of 1 for our food hygiene, the lowest while still being allowed to remain open. ‘I will visit again in a month’s time’ said the inspector. He has the power to close us down on the spot.

It was obvious we couldn’t get all that done in a month.

First we sorted out the hows and whens and whos of getting it all done and the inspector agreed to defer his visit a month when we gave him our timetable. So we have had two karma yoga retreats since then and a third is underway right now. Robin agreed to come down from Oban to sort the kitchen wall with Colin’s help. Colin sorted the banisters and a temporary mandala fence and  I agreed to sort the kitchen clean and food hygiene management system  – all with the support of various helpers to cook, clean, fetch and carry, hold ladders and keep us sane. Alex and I have had a stab at risk assessments but there is loads more to do.

The April karma yoga was a non-stop 6 day devastation of the kitchen. Robin and Colin framed up, fixed the plasterboard and brought someone in to plaster, a very skilled job, whilst Rowan and I tried to create some sort of order so that Colette could cook (in both kitchens).  We cleaned the units, electric cooker and big fridge and cleaned up after the workers. Rowan painted the plaster once it was dry. Amidst this absolute chaos I tried to figure out a food hygiene plan, how to reorganise the kitchen to suit it and how to construct it so that the community as a whole, as well as Health and Safety, would accept it. I was completely exhausted by the end of it. 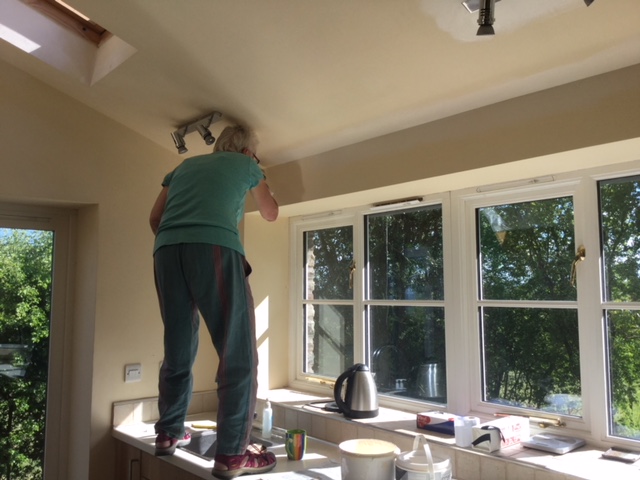 It was obvious we would need another karma yoga to complete the kitchen and implement the management system and I agreed, with Stephie’s, help to organise it. It was set for the week before the Mandarava dance retreat and during the intervening time I worked flat out devising the food hygiene management system. This basically comprises doing what we already do but more systematically and within a better organised kitchen and store, with better cleaning products and a series of check lists so that retreat organisers know exactly what needs doing on a daily and weekly basis to maintain food hygiene. Cooks should have an easier time because of it. The only new thing is the diary, a Health and Safety requirement, which has to be completed each day by the retreat organiser. We thought it would be a drag but is in fact proving quite useful.

So Stephie and I arrived, car loaded with new cleaning products, tea towels, hand towel dispenser, fridge thermometers, files etc thinking the two of us could easily manage. We had four clear days before the inspector’s visit. After a short Tun we began cleaning the kitchen ceiling and walls. Impossible.  None of the paint was washable and the plaster started showing through. It was obvious the whole kitchen had to be repainted with good washable paint! Fortunately I had anticipated that some painting might be necessary on the newly plastered wall and had bought paint on the way up.  But the ceiling? We would need more help. So while I stood on top of the ladder wielding a brush, Stephie started emailing. 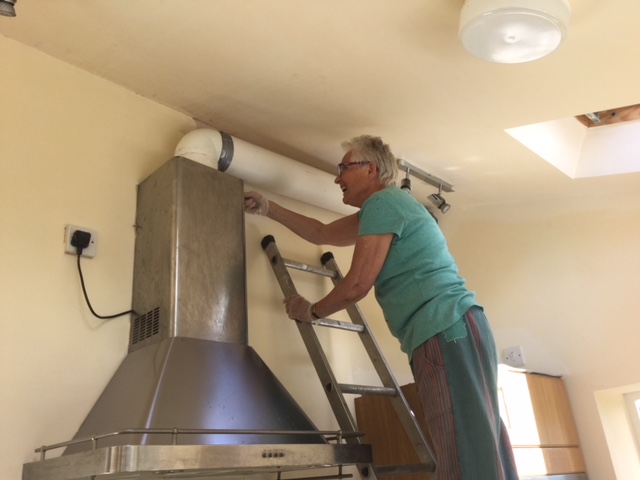 Red and Alex came to the rescue and put in two long hard days cleaning, whilst Red cooked as well. We were a great team, the green team, and achieved miracles and it meant Stephie and I had time to nip into Hay to get laminates made of the various documents. So when Thursday morning came we were ready for the inspection. The inspector’s first words were, ‘You’ve done a lot of work’. It was a good start, but he wanted to see the gas cooker certificate which we did not yet have and the level 2 food hygiene certificates for the kitchen manager (me), the cooks and retreat organisers. I have now sent him three with more to follow. Unfortunately, the temporary work to the mandala fence does not comply, so that is an urgent job to be done in the current karma yoga retreat. I don’t think we will get an upgrade to our dismal grade 1 until all the certificates have been sent in.

I had planned our dates so we overlapped with the Mandarava retreat so that I could present the food hygiene management plan to the gakyil members, retreat organisers and cooks present. There were quite a few. I was very nervous. I wasn’t at all sure what my reception would be. Dzogchen Community members are not famed for toe-ing the line and conforming in any way. I needn’t have worried. By the time I was finished there was general enthusiasm and by the end of the Mandarava retreat Jane reported back how well it had all worked. Whew!!

So what next?  Well, the gas cooker maintenance was carried out this week and it was found to be too dangerous to use because of carbon monoxide levels, so we have to buy a new one and the mandala fence should be sorted by the end of the week. These are urgent essentials.

We also have to carry out risk assessments for the whole property, identifying potential hazards, grading them according to severity and doing something about all but the minor hazards. We have made a start and dealt with the major hazard of food safety. Maintaining a clean kitchen and hygienic food into the future is up to each one of us. We need to follow the new system conscientiously whether on personal or group retreat and make it a part of our practice, of developing relative bodhicitta, care and concern for the well-being of others. 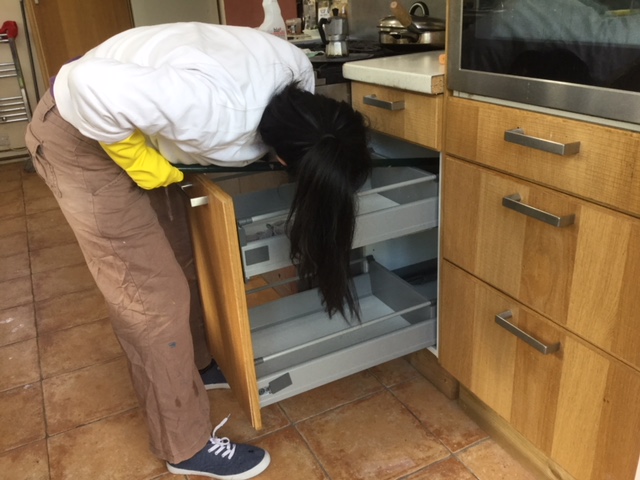 Another potential hazard has immediately become very clear. We need to know who is at Kunselling, at all times, whether overnighting or just for the day. If we don’t and a fire breaks out, we have a break in, there is an accident or some incident or other and the authorities are involved, we could be in deep trouble. It is up to each one of us to make sure we book ahead and never drop in unannounced even if we know others will be there. Unless there is a retreat on, Rowan must always be contacted in advance. When a retreat is in progress, contact the retreat organiser,  who will know if there is space and if it is appropriate for someone to just drop in or come for one day.

I had no idea, when I rashly volunteered to take on this Health and Safety stuff, quite how much time it would take, just how severely it would do my head in or how exhausted it would make me. And it’s not over yet. There will always be more. But it’s a great experience, a steep learning curve for one who has always been rather slap dash in the kitchen and around safety issues.  Working closely together with others, the green team in particular, has been a great joy and deeply satisfying and I look forward to more of it.

The next karma yoga is in September. Are you planning to come?